VMware Player has a nice auto-detection of kernel changes, and requests the user to compile the required modules in order to load them. This happens from time to time after a regular update of your system. Usually, the dialog of VMware Kernel Module Updater pops up, asks for root access authentication, and completes the compilation.

VMware Player or Workstation checks if modules for the active kernel are available.

In theory this is supposed to work flawlessly but in reality there are pitfalls occassionally. With the recent upgrade to Ubuntu 13.04 Raring Ringtail and the latest kernel 3.8.0-21 the actual VMware Kernel Module Updater simply disappeared and the application wouldn't start as expected. When you launch VMware Player as super user (root) the dialog would stall like so: 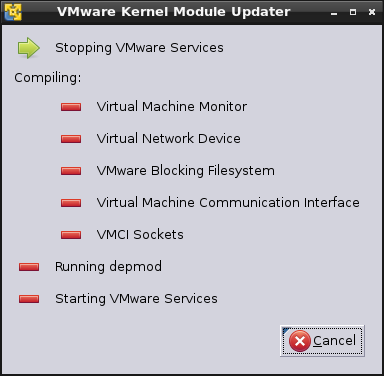 Prior to version 5.x of VMware Player or version 7.x of VMware Workstation you would run a command like:

to resolve the module version conflict but this doesn't work anyway.

Instead, you have to execute the following line in a terminal or console window:

Those switches are (as of writing this article) not documented in the output of the --help switch. But VMware already documented this procedure in their knowledge base: VMware Workstation stops functioning after updating the kernel on a Linux host (1002411).

Since the release of Windows 8 it should be obvious to any Windows software developer that there are new ways to develop, deploy and market applications for a broader audience. Kraig covers all facets of modern Windows 8 app development.

Get Blogged by JoKi
—
VMware Kernel Module Updater hangs on Ubuntu 13.04
Share this