Despite the fact that I'm using Logitech products since ages it is only now that I accidentally came across a Linux application that allows me to configure their Unifying devices: Solaar

Solaar is a Linux device manager for Logitech's Unifying Receiver peripherals. It is able to pair/unpair devices to the receiver, and for most devices read battery status.

It comes in two flavors, command-line and GUI. Both are able to list the devices paired to a Unifying Receiver, show detailed info for each device, and also pair/unpair supported devices with the receiver.

Sounds great, or? And finally, the tool gives you some comfort compared to the existing application available for Windows or Mac OS, like battery status indicator or the ability to pair devices to the receiver you would like to have them (in case that you use multiple receiver at the same time). 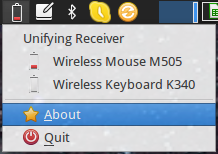 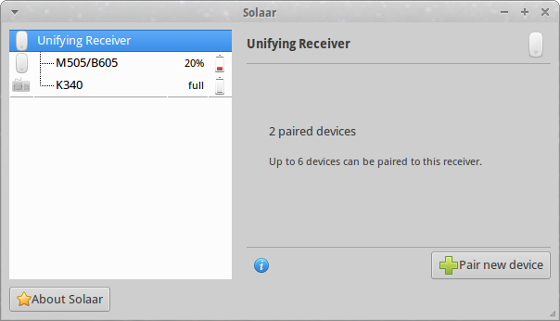 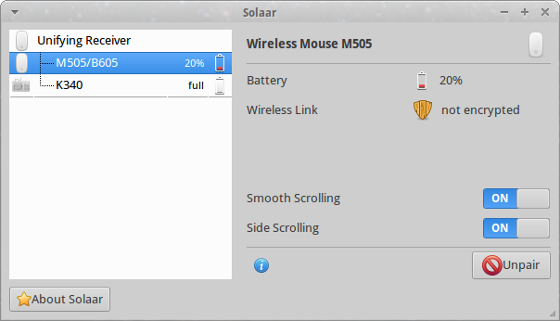 Some Logitech devices can be configured with Solaar

I got my Laptop peripherals as part of a laptop set, namely K340 keyboard and M505 mouse, which are listed as supported devices. In case that you are not sure, check whether your USB hardware is supported by Solaar. You can check that by running the following in a console or terminal application:

The output should be similar to mine.

There is an extensive list of supported devices and supported additional features on the Solaar site. Don't miss that one.

There are either pre-built packages for some distributions available or you can get the sources to compile it on your system. Have a look at GitHub for more details. Running Ubuntu (or any Ubuntu-based flavour) the installation is fairly easy. Add the existing PPA to your list of software repositories, update and install:

After that you'll have a new shortcut in the Accessories menu. On the first launch, I got a message that Solaar doesn't have the userrights to access the USB devices. Simply pull out your receivers and plug them back in - that resolves the issue.

Solaar is both - a graphical tool as well as a console application. This might come in quite handy even though I'm not sure how. Anyway, you can get information about your Logitech devices, pair/unpair and configure your peripherals via solaar-cli command. Following is the output of my system:

Surprisingly, nothing that we didn't know already. The help switch (-h) provides a brief overview of what can be done.

Please, feel free to leave a comment about how solaar-cli could be helpful compared to the UI version of the tool.

But what happened to dasKeyboard?

Read more about that in separate article about How to choose the right keyboard for coding.

Solaar is a Linux device manager for Logitech’s Unifying Receiver peripherals. It is able to pair/unpair devices to the receiver, and for most devices read battery status.

It comes in two flavors, command-line and GUI. Both are able to list the devices paired to a Unifying Receiver, show detailed info for each device, and also pair/unpair supported devices with the receiver.

Some days ago there was this big announcement that Jeff Atwood together with WASD Keyboards developed the CODE keyboard that is especially designed for software developers.