Through social media networks, especially Facebook, I got aware of the fact that there would be a gathering of Mauritian Bloggers. What a cool idea! Interestingly, it wasn't the first meet-up and if I'm correctly informed there had been meetings like this one since 2009. At a time, I was already on this beautiful island, and others knew that I was blogging. Well, there had been quite some rain lately, and honestly I don't want to dig up rotten corpse from the dead. Initially, I discovered the Facebook event through a comment or Like by a connected friend, as I wasn't part of the organising group 'Mauritian Bloggers' but luckily the event was open to anyone and I could follow the organisers and the comments.

Surely, a very good, central location and a wise choice by 'Carrot Madman VI'. There are surely enough parking lots, enough space to join forces and discuss one or the other topic over everyone's own preferences of food and beverages. And last but not least there are quite some locations for a decent group photo - just in case that someone 'insists' on this kind of memory hoarding. I still have to find one of the shots... Mauritian Bloggers - Help! ;-) 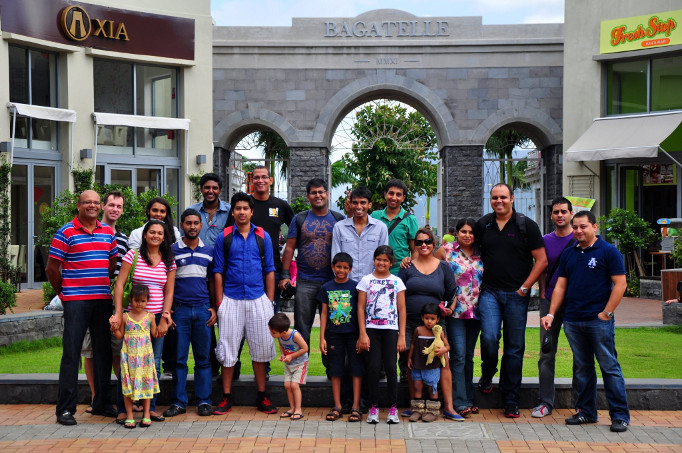 Arriving - not - in time but still not among the last

Hm, the event was scheduled between 11:00 hrs and 17:00 hrs which is actually a good period of time to make it to the gathering. Personally, we managed to show up shortly before noon - due to important moves on Ingress - and there were already about ten bloggers enjoying the company. Of course, new face = short introduction...

Actually, it's nice to be able to tag a face to the various blogs written about Mauritius. The atmosphere is relaxed and I was quickly involved in the ongoing conversations. Hopefully, I wasn't too overwhelming when I started to talk a bit about my latest hobby of Ingress by the Niantic Labs. Frankly speaking, I am wondering since the time I started playing Ingress about the two vital elements:

Taking into consideration that most Mauritians have Android-based smartphones, and that there are quite a number of technical blogs around I couldn't get it. But hey, I hope that I ignited something and the situation is going to change very quickly soon.

"Gonna install it as soon I reach home"

"waiting for the activation code too. I'm gonna hack your portals."

First responses on Facebook look very promising and it would be awesome to have more action play in Ingress soon. It would be of great pleasure to write one of the first SITREPs for Mauritius. For sure, more to come. Keep an eye on my Android section here in the blog, too.

I wrote a brief overview about playing Ingress in Mauritius. Please check it out...

This was definitely not my last attendance and I'm looking forward to the next event of Mauritian Bloggers! And a 'Big Thank You' to the organisers, too!

Playing Ingress by Niantic Labs is still a tough challenge on Mauritius. Hopefully, this article will increase awareness and recruit more agents.

Thomas Greanias recent publication The Alignment: Ingress marks the start of the new series and it wets your appetite for more episodes in the universe of Ingress.