Wow, it has been a while since I managed to visit the author's corner of my blog. Well, quite frankly there had been a variety aspects and quite a number of excuses to avoid coming to this place and I'd like to write a little bit about it. Eventually, this article might be a little bit boring for some of the readers but I would like you to join the comment section at the bottom - maybe after reading the following lines.

Well, gratefully I have to report that the first ever Developers Conference had quite some positive impact on the local IT scene and we managed to reach out to some international audience, too. Apart from the (mostly) positive feedback of participants, speakers and sponsors alike, I would like to mention that the event received a little bit of media coverage, too. Despite our (short) preparation period of approximately 3.5 months and a small core organisation team of 3 people, I would say that we had quite some fun and hopefully were able to deliver some interesting content. But quite frankly I would like to remind people here on the island that it is about taking action and doing things... don't just sit there, talk about potential ideas and throw them overboard just because one or two people in your inner circle are discouraging and pointing out "so many problems and eventualities".

Remember, Rome wasn't built in a day and adventuring a journey of 1,000 miles starts with a first single step.

Taking a vacation from my blog

But coming back to this blog, I have to admit that I was simple taking a mental vacation from it. The preparation period of the conference as well as running the event in high gears was kind of exhausting - physically and mentally. And hereby, I would like to express my deepest gratitude and thanks to my loving wife, Mary Jane, and my two little monsters for their patience and light short-comings in terms of "paying attention", "being around", and of course "daddy-time in general". Thanks and I love you all...

And of course, there is the business side of the medal. Spending quite some time on arrangements with potential sponsors, having frequent exchange with potential speakers, and getting the conference web site in shape was kind of exhausting. But don't forget, I'm a small business owner, and spending time on such extra-ordinary activities has actually a double-impact. Yes, it does. Any non-productive time, economically speaking, directly implicates less incoming money on the bank account. So, while I was really enjoying the extra-time donated to community and creating more awareness of the Mauritius Software Craftsmanship Community in general, I had to keep an eye on the financial situation of things, too. 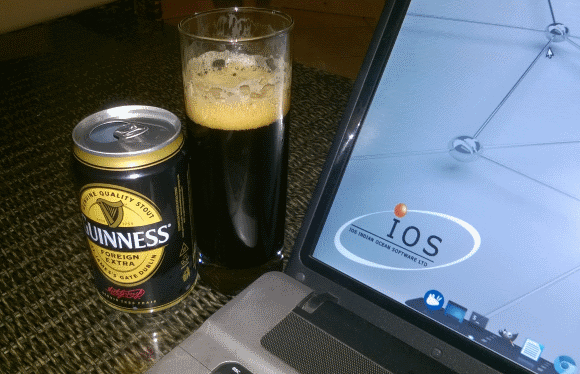 Obviously, there had been some catch-up to be done right after the event in order to keep my clients and my chief financial officer (read: BWE) happy. And so, instead of hanging out on the beach enjoying the perks of living on a tropical island, this meant to keep the caps on the keyboard warm and in constant movement. Like a well-oiled machinery that just needs some TLC from time to time I was hacking down lines of code during the last two months actually. Again, I really do love my profession and from that point of view, it never felt like an obligation or burden to get rid off of a pile of queued up work. Aux contraire, it felt great to be "back" and stay focused on coding lines after lines for my customers' requirements.

Now after roughly seven to eight weeks in, I'm still not sure whether it feels right to finally pick up blogging again. Honestly, due to narrow focus on work assignments - even though being busy with a variety of different contexts - I was waiting for the right moment to write here on the blog. Maybe you might have a similar experience that even though you have a fantastic idea to blog about... that there's a lack of inspiration, or should I say passion?, to actually sit and starting the article. Well, tonight it just feels right. The last two weeks had been great and I'm feeling the energy coming back to me. Right now, I'm again in a position where there's a little extra time... and some light cuddles of inspiration are whispering into my ears. ;-)

Yeah, that sounds kind of awkward...

Being occupied with other activities

Apart from writing code for customer projects and assignments I have been busy reading a good number of technical books on different topics. Again, I' have a good feeling about writing some reviews during the next couple of weeks. Most titles were of technical nature but there had been one or two titles from different genres in-between.

And, not to forget to mention I also got some event invitations which I had to attend to as well. Honestly, the last two months had been great in all kind of flavours - hahaha, expect for entertaining this blog - and I'm really looking forward to share some of those experiences with my readers. And there are going to be some technical entries, too.

Anyway, I kept my notes of interesting topics I would like to pin down here on the blog, and during the upcoming weeks I'm confident to share my thoughts on various aspects of software development, community activities in the IT world of Mauritius, and of course life in general.

I have to admit that even though I use Microsoft Windows on a daily base to earn my living, I'm also using Linux since almost two decades on various machines. Together with different types of virtualisation I actually do not care whether an OS is running on bare-metal or inside a virtual machine.

Running an operating system like Ubuntu or any of its derivates, like ie. Xubuntu, comes with some nice treats (and threats?). One of the nice things is that you'll get a scheduled upgrade approximately every six months. Usually, around April and October of each year.

Get Blogged by JoKi
—
Live and let live - modern laziness...
Share this